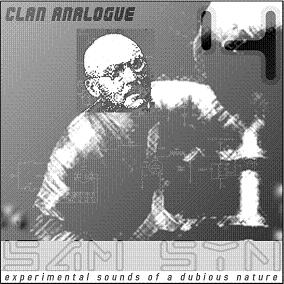 Originally released in 2003. Following on from the acclaimed Clan Analogue compilation Habitat: Environmental Sound Research, out through Creative Vibes, Clan Analogue Melbourne’s new limited edition sampler CD Sampled Synthesis volume 4 continues to pursue electronic sound to the extremes of the electromagnetic spectrum. For volume 4, Clan Analogue have explored the disturbing underbelly of sonic manipulation, to produce a collection of psychological sonics and tones of indeterminate probability. Listen if you have the will… Included on Sampled Synthesis 4: -1. Rob Witt Bassic Trip03 by Evan on Earth + Exploring the feeling of humming and rumbles, these sounds are blended field recordings, taken from a spacecraft's close orbit to Earth. -2. In Defence of Imperialism by This Corporate Militia + With much experience in locking doors and leaving windows open, This Corporate Militia provide added security for any paranoid imperialist. -3. Rocket Number 10 by Old Des Peres + Jazz from the far side of Pluto, imparted through an intergalactic transistor. -4. Paris in the Twentieth Century by Reductionist + A sonic exploration of the death of the dream of human progress. -5. Grit by Tolchok + A soundscape of textures and ambience, layered and cut to take the listener on an aural movie, with the bacardi never far away. -6. Eudemon by Steal Straight Nine + Arpeggios, strings and clicks vanish in a ball of reverb. -7. The Quiet by City Frequencies + 4am in the city, alone with the sounds of pure existence. -8. Iniquity and Sin by Tahl + Gritty reality-based drum’n’bass after a trip to the medicine cabinet. -9. Cryptic (dub) by Winduptoys + Forms, shapes and fragments collide and coalesce until disequillibrium is reached. 10. Psycavalo by Klej Butapren + Klej’s last testament before retiring to Queensland, noise, glitch and minimalism are mixed using antique analogue headphones.
see also Sampled Synthesis 01, Sampled Synthesis 02,Sampled Synthesis 03, Sampled Synthesis 05,Sampled Synthesis 06
http://clananalogue.com